With Mother’s Day approaching I have been thinking of my mother. I wrote this five years ago.

It was my day off.  I awoke feeling achy and had not slept well.  So I went to Cameron, my acupuncturist.    “So what’s going on?” he asked, ready to write down the things he would soon treat.

“Well, I had to sleep on a 60-year-old mattress last weekend while staying with my husband’s mother when we were in Pennsylvania, It’s the same mattress he slept on when he was a kid.  As a result, I got pain across my right shoulder, in addition to my normal stiffness on my left shoulder.  I was not happy about that.”

“Yup.  My allergies flared up and I got airplane ear on the descent to West Palm Beach and now I have fluid in my Eustachian tubes.  Very annoying.  And I’m sleeping on a new mattress at home—Dave loves it—memory foam top over a coiled foundation.  For me, it’s giving me lower back pain, in addition to the pain from the PA mattress.  I’m giving it 30 days to try to get used to it.”

He laughed in sympathy with me at that point.  “Anything more?”

“Your mom died.” He finished my sentence for me.

“Yes, that’s the topper.  You saw it on my Facebook page.  Thanks for your condolence message.”

“Losing a parent is tough.  Let’s see if we can get you feeling better.  We’ll start with you on your belly so I can needle your neck and lower back.”

And so he did, the needles slipping in with hardly even a prick of pain or my notice.  Cameron left me with the Asian music surrounding me.  I was alone.  I tried to concentrate on breathing.  I put my go-to image of peace in my mind.  In it I am sipping a soothing cup of tea while standing in a gazebo watching the view of the mountain lake down the hill.  Grief slipped in instead. I began to cry.  “Well, this is bad, because I won’t be able to blow my nose since I can’t move when the needles are in,” I thought.  No matter; I could not stem them.  I was facing down with my head on the donut headrest. The tears flowed down from my eyes to my nose and then dripped on the floor.  I had to sniffle up the inevitable snot and breathe through my nose.

“Crying is good,” Cameron later told me.  I know that, of course, since I have grief counseling experience in my duties as a parish pastor.  What I don’t understand, is why I cry at all.

My father died twenty-five years ago when he was age 60.  I had plenty of reasons to cry then since he was the parent with whom I was closest.  I also was six months pregnant with the granddaughter he would never see.  I was sad and felt robbed since he was so young.  Yet, at his funeral and in the days before and after, I barely shed a tear.  I did not feel guilt about that.  I try not to feel regret at emotions I cannot control.  Emotions just are.  I simply did not grieve in a mighty way about my dad, although I loved him.  My tribute to him is the flower gardening I enjoy.  That is when he is close to me since it was he who instilled garden-love in me.

Crying unexpectedly, crying in the car, crying at the altar when leading worship the day after Mom’s death, crying when I try to sleep—crying at all—surprises me.  This is not the same as when Dad died.  It stuns me.

Mom was a detached parent.  I have only one childhood memory of her holding me in her arms and none of her reading to me.  Our main interaction was my drying dishes.  When I left home she was not one who took an active interest in my life through many letters, cards or phone calls.  We talked and visited, yes.  She was a good listener and nonjudgmental.  I liked that.  We were kindred spirits in both having been middle children who moved from the home area.  This meant she understood my experience of being out of the loop on family issues since it had happened to her as well.

However, when two major hurricanes blew directly over my house in 2004 I heard not a word from her and finally called her two weeks later.  “Oh, I was wondering how you were,” she said and then listened to my tale of the wind, rain, and a still-standing house as I tried to explain what hurricane shutters look like.  I could have been blown away and she would not have thought to check in about it.  I was the initiator unless she had some news to share such as her health concerns or a family matter.  She seldom called just to talk and see how I was doing.

This was her way.  During the ten years between my dad’s death and her remarriage, I learned to understand her better.  Her introverted personality was no longer overpowered by my father’s gregarious manner so I got to see beneath the detachment.  She had seen little physical affection in her growing up, but had seen anger.  I think that is why Mom was good at anger.  Very good.  When her hands were on her hips we kids did not want to be the target of the verbal barrage that was to come.  One afternoon, when my sister and I were teenagers, we heard her fighting with our over-the-fence neighbor and we were ashamed because we knew she had crossed a line and was being unjust.  She would yell first and ask questions later.

As a result of this deeper knowledge of her, I long ago let go of any anger or resentment that she was not what I thought she should be as a mom.  I surmised that she had done a better job as a parent than her own stern, cold, rather emotionless mother and father.  She also knew that.  On one of her biennial visits to me in Florida she said, “I could have never talked to my mother and share things about my life the way you four kids talk to me.”  She was obviously proud of that and had not a clue that I and my three siblings viewed her as relatively detached from us.  In her estimation, she was close to each one of us.  That lovely feeling was not mine to take from her.  I came to appreciate that she and Dad had done the best they could.  This freed me to feel gratitude for the blessings, rather than lament the shortcomings

“Dave,” I said to my husband more than once, “I wonder how I will feel when Mom dies?  I imagine it won’t upset me very much, although I will miss her.”  It seems I was very wrong in that assumption.  I am mourning her, truly mourning.  How can this be?

My brother, Tim, delivered a eulogy at her funeral.  As a professional performer, he comfortably did a good job sharing aspects of her personality and the essence of her character.  I laughed and nodded my head in agreement many times as he reminisced.  Then, truth came calling in this particular reflection.  He said, “Mom lived in Oley for twenty years.  Then she and Pop moved to Temple where she lived after he died.  Then, when she married Larry she moved to Lititz, PA.  After Larry’s death, she moved back to Oley.  But no matter where she lived, I always knew she was my home.”  John Denver wrote a song, Hey It’s Good to be Back Home Again.  In it he speaks of shared meals, warming fires, family conversations and going to bed with a good night kiss.  He characterizes home as a long lost friend.  That, I believe, is why I grieve as unexpectedly as I do.  My mother represented Home.  She was my history and a touchstone.  In ways I did not understand until she died, she was my heart.   I will never be able to go back home again. 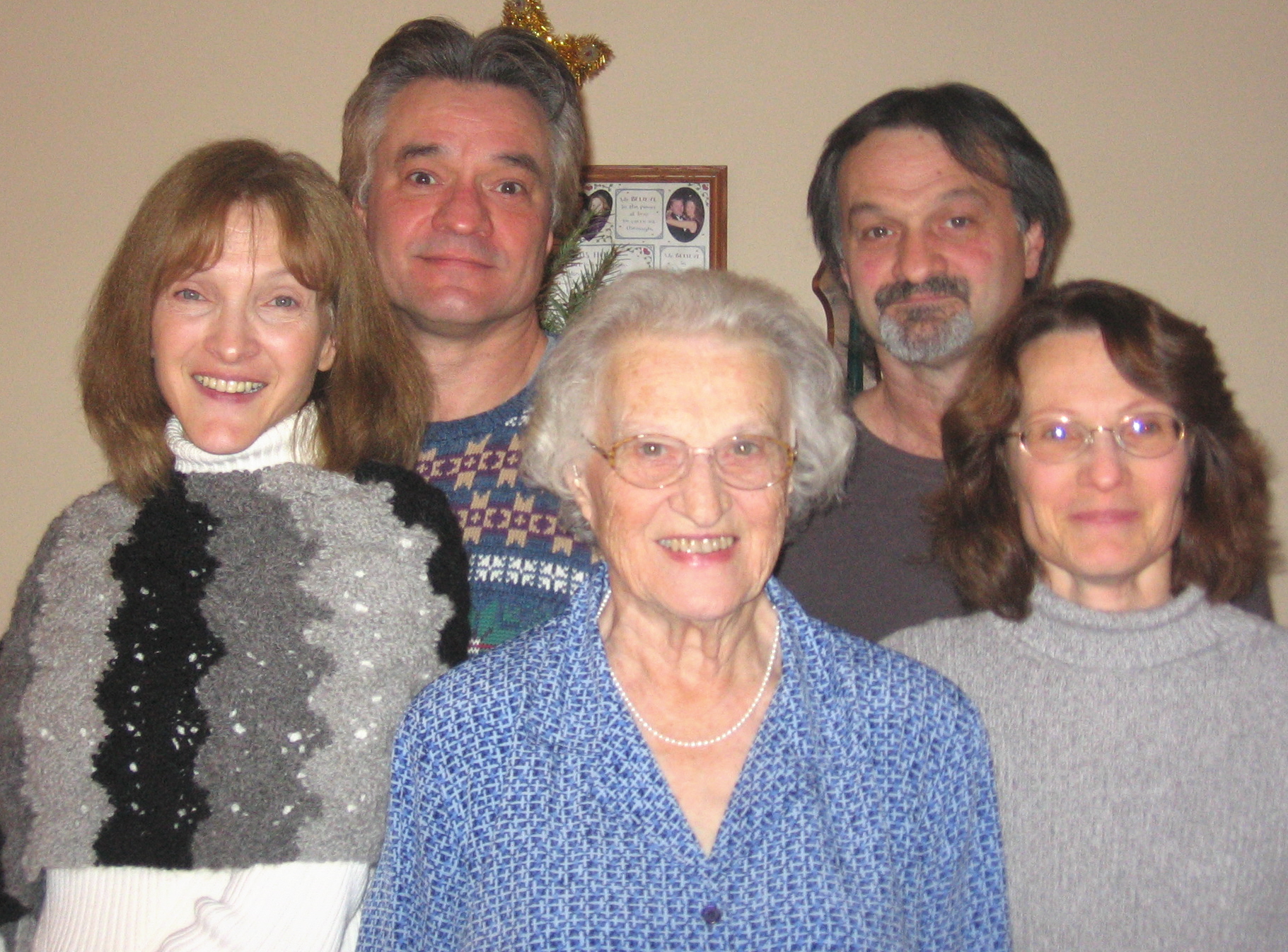 Lutheran Pastor since 1980 when just two hundred women were ordained in this denomination in the US Wife, mother, grandmother, knitter, flower gardener, happy Florida resident, writer of an award winning memoir: Praying on Empty, A Female Pastors' Story View all posts by Marjorie Weiss

This site uses Akismet to reduce spam. Learn how your comment data is processed.